Alex Tan, better known under the screen name PangaeaPanga or formerly Penangbenny, is an American ROM hacker and speedrunner. He is best known as being the creator of the most difficult Super Mario ROM hacks in existence, as well as for being one of the original Kaizo creators in Super Mario Maker.

In addition, he is also known for having the former world record for playing Super Mario World blindfolded.[2]

Panga started playing through Super Mario World while blindfolded on June 16, 2015, and completed a full run of the game eight days later with a time of 23:14.[3] In order to beat the game blindfolded, Panga memorized a route that was "easy and consistent," using musical cues from the game to know when to carry out certain actions.[4] After having his world record beaten on July 20, 2016, in a time of 17:46, he reclaimed the title a few days later on August 8, 2016 with a time of 15:59, before once again having his world record beaten on May 24, 2017 with a time of 13:31.

Panga's most notable levels are his "Pit of Panga" series. Originally named "Panga's Revenge," this series gained notoriety for being some of earliest examples of Kaizo levels in Super Mario Maker. Two of the levels, P-Break and U-Break, were both later awarded the world record for the "Most difficult level created in Super Mario Maker" by Guinness World Records.[5][6]

Starting in early 2016, Panga created a new series titled "Passive Panga." These levels were designed to be more accessible for players and often have checkpoints.

Panga has designed two levels for Games Done Quick events. This also marks the first time one of his levels has been rated as Expert by the Super Mario Maker bookmark website.

Panga also has a mini-series of levels dedicated to April Fool's Day. These are levels that feature heavy trolling and are nearly impossible to figure out without opening the level in the editor. 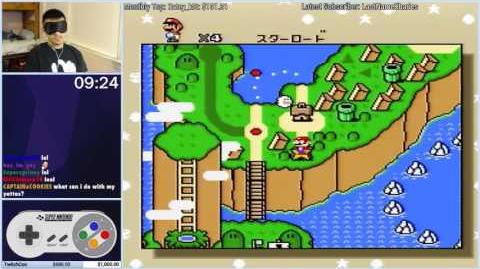 Retrieved from "https://kaizomariomaker.fandom.com/wiki/PangaeaPanga?oldid=20220"
Community content is available under CC-BY-SA unless otherwise noted.