Cape Mario is the form Mario turns into after obtaining a Cape Feather. Cape Mario is only available in the Super Mario World game style.

This form allows Mario to slowly float down when falling. Mario can attack enemies with his cape by spinning. He is also able to fly indefinitely if he runs for a short time and then jumps.

When Cape Mario gets hit while diving he will not take damage and will instead cancel his flight and start spinning.

If Cape Mario dives into the ground during flight, it will cause a quake that instantly defeats all on-screen enemies that are touching the ground.

By spinning the cape after gaining cape speed, Cape Mario is able to retain the ability to fly even when standing still.

Note: This only works on levels created before version 1.44
By diving and flying into a ceiling, Cape Mario is able to stick to the ceiling while flying. 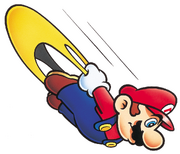 The Weird Mario that appears when tapping on a door.

The Weird Mario that appears when tapping on a door.

Retrieved from "https://kaizomariomaker.fandom.com/wiki/Cape_Mario?oldid=21021"
Community content is available under CC-BY-SA unless otherwise noted.